Buoyed up by seeing Ancelin’s map (and a strong coffee), I changed plans and headed for the site he had surveyed: the Maas. Normally I’m pretty good at navigating ‘down’ to a river, but as the rain got harder – and the route disappeared off the edge of my limp little tourist map – I got wrong.

What should have taken 20 minutes turned into an hour and half slog. Finally gaining the park bordering the river, it became apparent it’s not the place for lazy Sunday strolls. The wind blasted the rain horizontal, washing the colours from the passing container ships. I pitied Ancelin his slow traverses of this wide wild expanse: the vessels may have changed but the weather remains the same.

Friday morning, sneezing but dressed for it this time, I walked through another meteorological onslaught to the Hoogheemraadschap van Rijnland, home of an older map still. 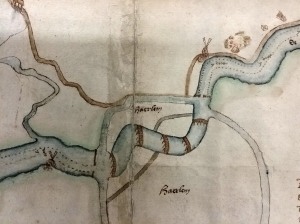 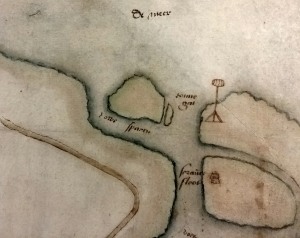 It’s a moot point whether Pieter Bruins’ map contains isobaths – more accurately – isobath: there is but one dotted line marked at ‘7 voet’, more underwater path (navigation channel) than exploration of depth. The 7’s are evenly spaced within the dotted lines that end abruptly before reaching ‘De Meer’, and desist completely on one section with a number of bridges. There are no calculations, scale or triangulation lines; just little buildings in old style relief including an oddly placed ‘volcano’, which on reflection, is probably a kiln.

For my purposes – tracing the history of a line – firstly, I’m not convinced it’s the right kind of line, more importantly I don’t think it was the spark of inspiration for other cartographers of his time, it’s over 100 years later that Ancelin bursts onto the scene with his fully formed and calculated lines.

With kind acknowledgements to the Hoogheemraadschap van Rijnland for access to their archives and permission to use these photographs.